​Rabbi Avremy Raskin was brought up in Burlington, Vermont, where his parents are the directors of the Chabad center. Rabbi Avremy’s journey to become a rabbi began in Chicago, Illinois, at the Jewish High for Advanced Studies. Then he went to study the Talmud abroad in Cholon, Israel. He spent the following year teaching Russian boys at a Jewish high school in Moscow. Avremy got his rabbinical ordination at the Rabbinical College of America, in Morristown, NJ. He continued his advanced Judaic studies at the Central Lubavitch Yeshiva in NY.

Mrs. Chaya Raskin was born and raised in Brooklyn, New York. She attended Beth Rivkah Elementary and High School. She continued her post-graduate Judaic studies in Machon Shoshana in Jerusalem, Israel. The following years were spent at different Chabad centers, she taught at Hebrew Schools, and directed youth and holiday programs. Chaya also directed Chabad’s Camp Gan Israel in Queens, NJ, New Orleans, and California. The following years she received her bachelors in education, and taught at the Lubavitcher Yeshiva Preschool, in Brooklyn.

Rabbi Avremy & Chaya are proud parents of their daughter Esther, son Aizik, daughter Risha, and baby son Mendel.
​
Moscow, Israel, New York, Chicago, New Jersey, Detroit, Canada, New Orleans, California. All have been touched by Rabbi Avremy and Chaya. Now, they are making Southern Vermont their home. The Rabbi and Chaya are proud to help the Jewish Community of Brattleboro in any way they can. 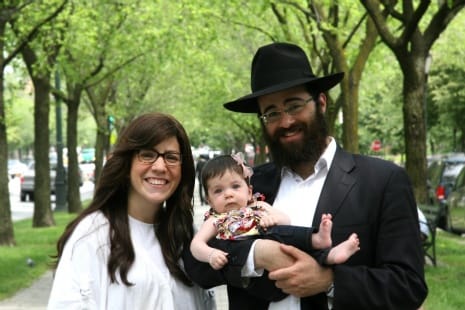 The Raskin family, as they appeared when first moving to Brattleboro